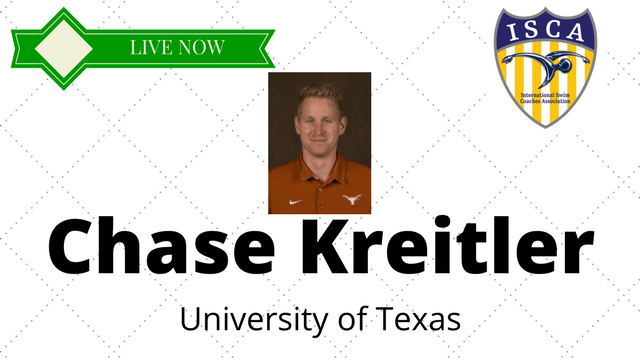 SHOW NOTES
Chase Kreitler is in his first season as a volunteer assistant coach with the Longhorns men’s swimming and diving program. Kreitler spent the previous three years as an assistant coach at Louisiana State University. At LSU, Kreitler mentored Frank Greeff to a tenth place finish in the 200 butterfly at the 2014 NCAA Championships and a silver medal in the 100 butterfly at the 2015 SEC Championships. Prior to his stint at LSU, Kreitler was an assistant coach at Eastern Michigan University (2011–2013). During his time at EMU, the men’s swimming and diving program won back-to-back Mid-American Conference Championships in 2012 and 2013. Kreitler coached two-time All American Jacob Hanson and the combined men’s and women’s programs broke 20 team records. While in Michigan, Kreitler also coached for the nationally renowned USA Swimming team, Club Wolverine. In the summer of 2013, he helped lead Club Wolverine to a first place team finish at the Central Zone Sectional Meet. Prior to Eastern Michigan, Kreitler spent two seasons (2009–2011) as an assistant coach for the California State University, Bakersfield men’s program. During his two years coaching at his alma mater, CSUB swimmers broke 10 team records. Coach Kreitler swam and coached at California State University, Bakersfield from 2005-2011. He broke 10 team records while swimming as well as became a co-captain as a senior.
Connect
Connect with Chase: