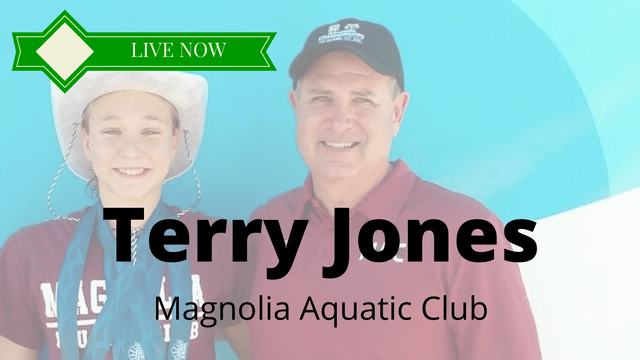 SHOW NOTES
Terry Jones is a graduate of Harding University in 1984 where he was an All American and has been the Head Coach of the Magnolia Aquatic Club since its conception in 2003. Terry’s primary coaching responsibilities here at MAC are with the National, Pre-National Teams. Coach Jones brings over 31 years of coaching experience to the team and is an American Swim Coaches Association Level 4 Coach. Since his time here in Magnolia, Coach Jones has helped build a program that has been recognized by USA Swimming as a Bronze Medal Team in 2012 and Silver Medal Club in 2013, 2014, 2015 and 2016 through the USA Swimming Club Excellence Program. In his time there, he has coached swimmers to the Junior National, National and Olympic Trials Level. Terry came to Magnolia from Temple, Texas where he was the Head Coach for the Temple Area Swim Club for 13 years and coached National and Junior National Qualifier’s (Including a Junior National Record Holder in 1995), numerous High School All-Americans and State Champions. Coach Jones was selected as a USA Swimming National Coaching Member in 2009 and 2016 and he has also served on the South Texas LSC Board as the Senior Vice Chairman and was the South Texas Senior Coach of the Year in 1995 and 1996.

What’s the POINT of Rotating in Freestyle?