123 How fast would fast be, if you didn't know what fast was? - Chuck Warner - RITTER Sports Performance 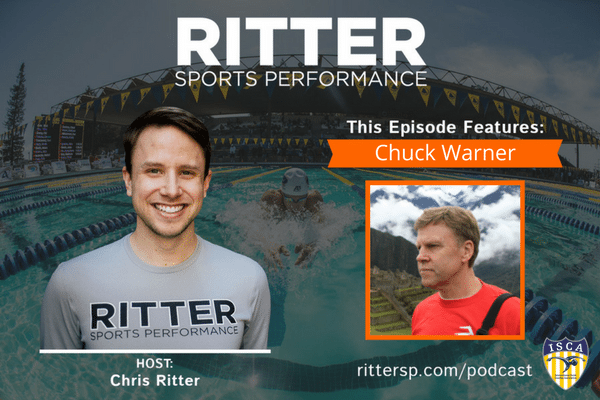 SHOW NOTES
Chuck Warner is the founder, President and CEO of ARETE Aquatic Services. Chuck’s swimming service began in the summer of 2012 and has been helping families and children by teaching how to swim, creating magnificent swim camps & clinics, working with ‘masters swimming’ and tri-athletes as well as creating seminars and authoring books. Chuck Warner has been coaching swim athletes for more than 40 years. Chuck’s swim team have won seven National Y team Championships, three NCAA Championship runners-up teams and several Big East Conference runners-up. He has also had the honor of being named a USA National Team coach three times. Not only has Chuck been a leader for swimmers with his coaching, but he has also written two books about swimming. The first is called “Four Champions, One Gold Medal” and the second title is “…and Then They Won Gold: Stepping Stones to Swimming Excellence”. The first volume is dedicated to male swimmers and a second volume, that has not been released yet, will be dedicated to female swimmers.
Connect
Connect with Chuck:
– Team Website
– Twitter
– Email
Resources Mentioned
Podcast Sponsors