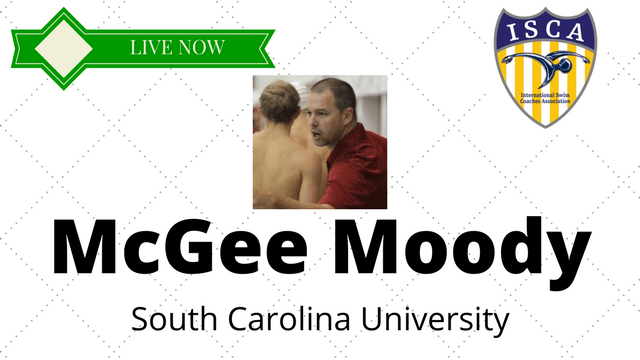 SHOW NOTES
Patrick McGee Moody has been the head swimming and diving coach at the University of South Carolina for 10 seasons. In his time of being a coach at the University of South Carolina, Moody has overseen a successful stretch for the swimming and diving program. Last season, the Gamecock men placed earned their highest finish at the NCAA Championships since 2000, placing 19th. For the third-straight season, the team’s 800 freestyle relay earned All-America honors. The women finished with nine dual-meet wins on the season, the most since 2002. In his early coaching career, Coach McGee spent four seasons as an assistant men’s swimming coach at the United States Naval Academy. During his tenure at Navy, Moody coached the Midshipmen’s first NCAA automatic qualifier since 1996 in addition to guiding numerous NCAA, Senior National and Olympic Trial qualifiers. His 200 and 400 freestyle relay teams finished the season ranked in the top 25 of the world. Moody earned both a bachelor’s degree in psychology and master’s in sports administration from ECU and is an active professional in the swimming community. He also served in the United States Navy, attaining the rank of Lieutenant. Coach McGee is also a member of both the American Swimming Coaches Association and the College Swimming Coaches Association of America.
Connect