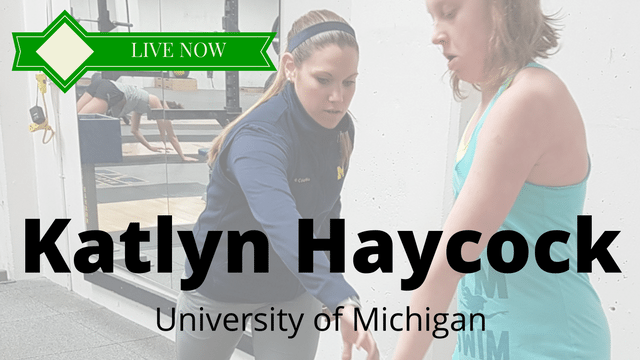 SHOW NOTES
Katlyn Haycock joined the University of Michigan Olympic Sports Strength and Conditioning team as a graduate assistant in August 2011 and currently serves as an assistant strength and conditioning coach. She is responsible for program design and implementation for men’s and women’s swimming and diving and for women’s soccer. In her time working at the University of Michigan, the women’s soccer team has made two NCAA Tournament appearances, and the men’s swimming and diving team has been three-time Big Ten champion (2012, ’13, ’14) and NCAA champion (2013). Prior to joining the Michigan staff, Haycock worked as an undergraduate assistant with Syracuse University Strength and Conditioning (Olympic Sports), assisting with the women’s tennis, lacrosse, soccer and ice hockey teams.
Connect
Connect with Katlyn:
– Team Website
– Facebook
– Twitter
Podcast Sponsors