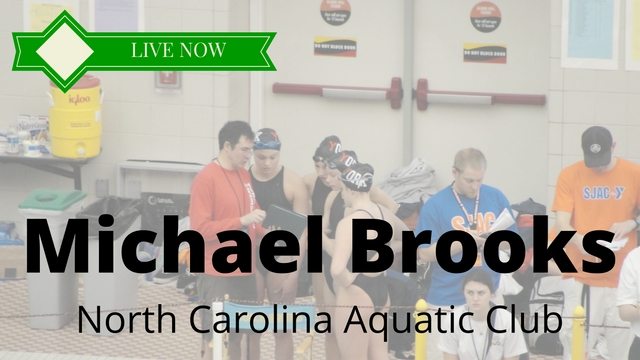 SHOW NOTES
Michael Brooks is the Head Coach at the North Carolina Aquatic Club. Previously, Brooks was the head coach of the York YMCA swimming team in York, Pa., since October 2006. In that time, in addition to scoring at the major domestic meets, York Y swimmers have represented the USA internationally at meets ranging from Junior Worlds, Youth Olympics, Junior Pan Pacifics, Pan American Games and various World Cup meets. Four of his swimmers have been named to U.S. Swimming’s National Junior Team and two to the U.S. National Team. The York Y was named a Gold Medal Club in both 2013 and 2015. In 2016, the York YMCA girls’ squad won the team title at the YMCA national championships. Brooks has spoken on wide-ranging topics, such as creating a culture of excellence, teaching technique, coaching effective practices, age group coaching for long-term success, coaching swim parents, creating talent in a small town, coaching individual medley swimmers, and engineering success for age groupers at meets. In addition, he has taught the American Swimming Coaches Association Stroke Technique School three times and the Physiology School once. In 2011, his book Developing Swimmers, a guide for age group swim training, was published by Human Kinetics. It was translated into Italian as Crescere Nuotatori in 2015. Brooks has been named the Coach of the Meet at the YMCA National Championships four times, Middle Atlantic Senior Coach of the Year twice, and Maryland Age Group Coach of the Year twice. His swimmers have raced to 50 plus YMCA national titles and over two hundred national Top 16 and Top 10 rankings.
Connect
Connect with Michael:
– Team Website
– Email
Podcast Sponsors