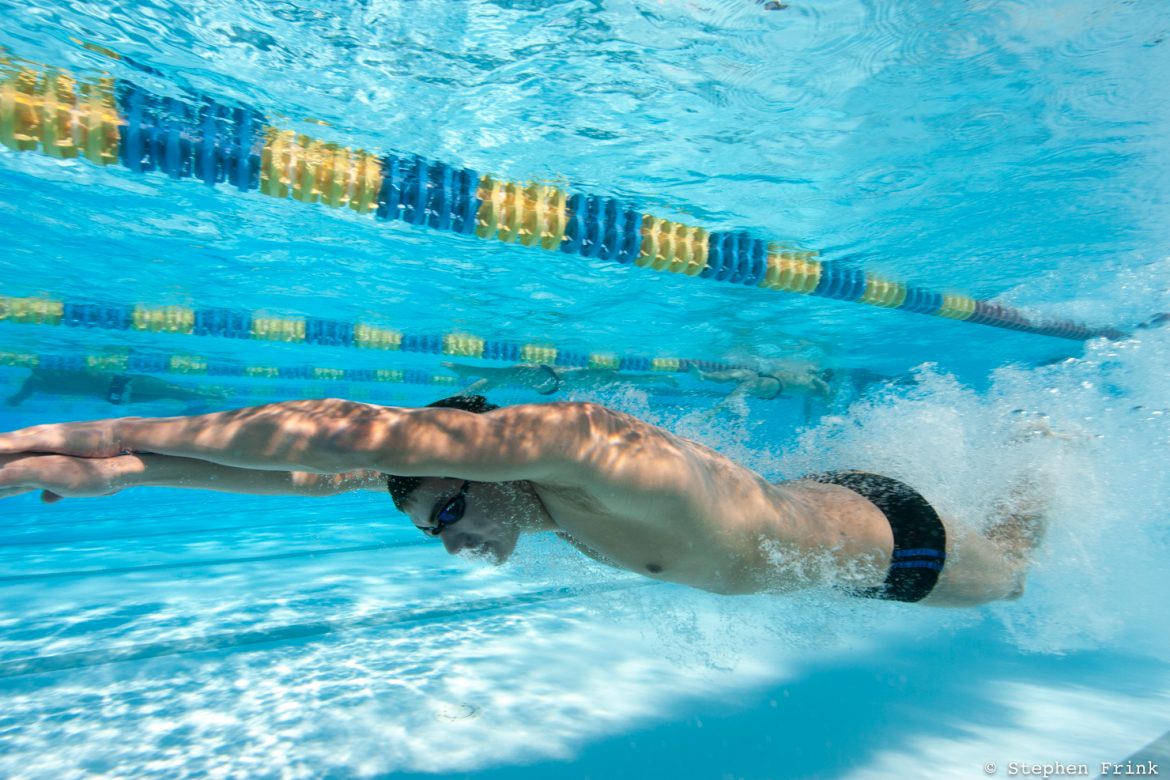 Welcome back! Last week we discussed the “Fine Line” between Distance Per Stroke and Stroke Rate. If you read last week’s blog post, you now know there is no “right” way to swim. The ideal balance between these two technical aspects is to maximize your DPS, while maintaining a high SR.

This week we plan to dive deeper into how you can EASILY double your velocity in Free, Fly, or Backstroke. There is one key element of these races that is often overlooked, which doesn’t make a whole lot of sense due to the fact that the world’s most elite swimmers have all mastered and maximized their use of it.

If you haven’t already been told, let me explain to you the magic of underwater dolphin kicking!

Underwater dolphin kicking (sometimes referred to as the “fifth stroke”) has not always been popular within swimming races. To give a little bit of back story on underwater kicking (UK), no one really knows who invented it. There’s rumors that in 1911 George Corsan, an instructor and pool designer for the YMCA, was teaching the “fishtail” kick. Also (much later) in 1935, Jack Sieg of University of Iowa used it in his breaststroke (aka butterfly) races—butterfly wasn’t an officially recognized stroke until 1952.

Also in the 1950’s, coaches started to realize that breaking the surface increased friction and therefore, may slow down the swimmer. This belief affect the breaststroke stroke predominantly. Many swimmers started staying underwater (UW) as long as possible each length. In the 1956 Olympics, Masaru Furukawa won gold in the 200m BR by swimming the first 3 lengths–45m UW. The last length he only made it to 25m UW, but still finished a body length ahead of the field. Eventually, the breaststroke pullout rule was established.

Between the 1950’s and 1980’s, few occurrences of the dolphin kick arose (i.e. Jesse Vassallo, Daichi Suzuki, and David Berkoff). But, by the time the 1988 Olympics rolled around–5 out of 8 finalists in the 100m backstroke stayed at least 25m underwater off the start. Check out this crazy Olympic final below:

Quickly after the 1988 100m backstroke final, FINA made a rule to restrict underwater kicking to 10m in backstroke. By 1991, the distance was changed to 15m. It wasn’t until the 1998, that the 15m rule applied to other strokes as well.

Back to our subject…

With that (awesome) backstory, why does underwater kicking work?

It is push off from the wall (or block) that creates the high speed underwater. The streamlined, horizontal position is what helps sustain the high speed (due to less frontal drag). And lastly, the constant and consistent small, tight, and fast dolphin kicks allow a swimmer a chance to maintain that high speed for as long as they can (for up to 15m).

If a swimmer is proficient at all three of these characteristics (A to C), they can create an underwater kicking speed 2-3x faster than their surface swim speed. If one of those 3 characteristics—A to C is off, the speed underwater won’t be as high (or as well maintained).

Take for example (the fastest man on earth right now), Caeleb Dressel. Caeleb is known for maximizing his use of underwaters. At the most recent NCAA championships, Caeleb cleaned up–claiming the 50 free (18.23), 100 free (40.00), and 100 fly (43.58) race titles. I performed a race analysis on his 100-yard fly and found some astonishing results:

During his 100 fly, Caeleb spent over 55% of his race underwater. Why?

Caeleb not only understands the benefits of underwater kicking, but uses it to his advantage during his races!

No one can touch Caeleb Dressel right now—not even close. Maybe it is time you learn from the best and put this work into practice! After all, an easily, attainable way to DOUBLING your velocity in the pool sounds like a nice, quick time drop to me!

Don’t forget to tune in next week—I plan to finish up our segment on the dolphin kick by talking further about the technical aspects of the kick itself. Plus, I’ll give you some drills and workout tips to include in your workouts!