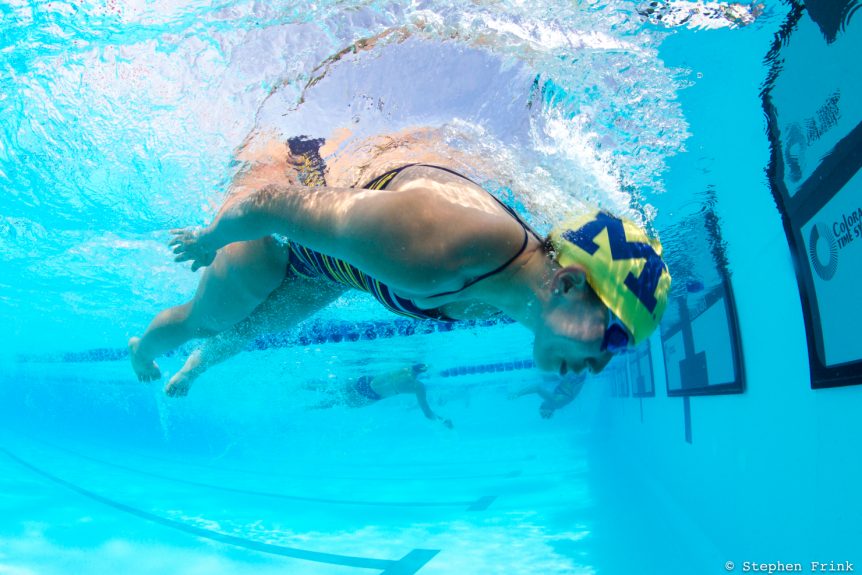 Welcome back to Part II of our series on Freestyle Flipturns. This week, we are going to discuss the turn itself, and how a swimmer can carry their fast speed through the approach and the turn!

If you missed Part I of this series on the approach into the wall, click here to learn the 3 things a swimmer should do to have a great approach.

A flipturn is a complex transition between two lengths of the pool. Consisting of the final two strokes, a hinge at the hips, the turn, and preparing to get the arms back into a streamline—there’s a lot more to a flipturn than just a somersault underwater. Let’s take a deeper look into these 4 portions of the turn itself!

The final two strokes into the wall happen at the very end of the approach. As we discussed in Part I, the more a swimmer can anticipate the wall and know their stroke count—the easier and more automatic it’ll become to know when to start the flip portion of the turn.

Each swimmer should pick a favorite arm, that they finish with before they initiate the turn. For me personally, I like finishing with my right arm (as shown below). 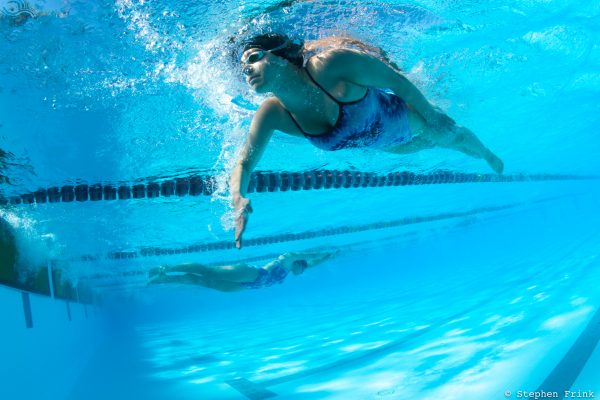 A swimmer finishing their final stroke into the wall with their right arm.

So with my preference, on my very last two strokes I start dropping my chin (the girl in the picture above actual lifts her head up—big NO NO!) and I finish the pull with my left arm, while recovering with my right arm. Once the left arm complete its’ pull, I keep it stationary by my left side, and it waits for the final pull to be completed with my right arm. The last two strokes are completed when both arms are directly by the swimmer sides and their eyes are facing towards the bottom of the pool. 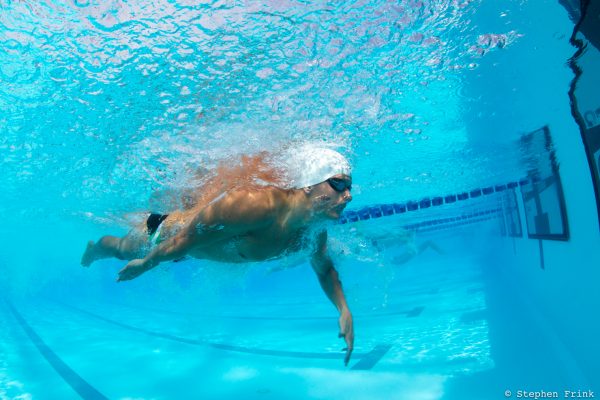 A swimmer finishing their final stroke into the wall with their left arm.

Think about it: if a swimmer is swimming towards the wall—they are carrying their speed forward. By dropping the chin and lowering the chest towards the bottom, the swimmer redirects their speed from the horizontal to more of a diagonal direction—between the wall and the pool floor. This change in where a swimmer’s speed is being directed is actually the first portion of the flipturn that SLOWS a swimmer down.

Since this is the first portion of the turn that drastically reduces a swimmer’s speed, it is best for the swimmer to complete the hip hinge as quick as possible. The goal of the hip hinge is to bring a swimmer’s chest towards their knees without any head lift. The girl in the picture below has a good hip hinge, but her head is a little too high. Ideally, your chin should be closer to your chest. 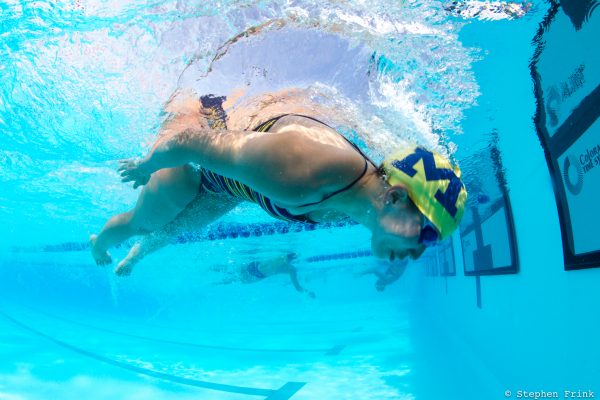 For more information on how to strengthen a swimmer’s hip hinge outside the pool, watch our video from our strength coach, Bo Hickey!

After the hip hinge is completed a swimmer must continue to bring the chest towards the knees and drop the head towards the bottom. From there, the legs will break through the waters surface and flip over the head—eventually, planting the bottoms of both feet on the pool wall. 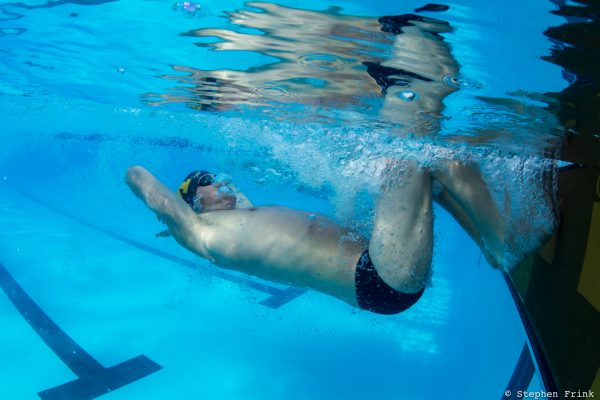 A swimmer who has completed the turn portion.

During the step of the turn, the most important factor is how small of a ball—a swimmer can be in. That means the closer the swimmer can get their knees to their chest—the better.

The reason behind this is due to the law of the conservation of energy. In physics, the law of the conservation of energy states that the total energy of an isolated system (i.e. swimmer in a pool) will remain constant, or conserved over time. Basically, that means all the factors that make up the energy of a rotating system (around one axis)–the swimmer’s mass, the radius of the mass, and the angular velocity squared if manipulated will come out to the same constant. So in reality, if a swimmer changes the radius of their mass (i.e. makes the ball of their flipturn) smaller—something else will have to get larger. Since a swimmer’s mass is unable to be changed in an instant, it would have to be a swimmer’s SPEED that increases to make up for the decrease in a swimmer’s radius. That is why it is SO important for a swimmer to have a focused approach into the wall, because with this they can effectively get ready for the turn and be a tighter ball and therefore, higher velocity when preforming it. 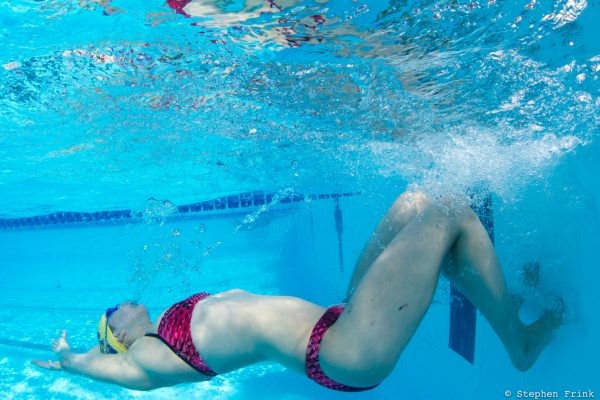 A swimmer who didn’t get into a LOCKED streamline, before their feet planted on the wall.

Try a test with your swimmers that’s called “Hot Wall.” During this test, give your swimmers 3 tries to perform a flipturn–your swimmer’s should start outside the flags for this. The goal of the test is to see who can get their hands into a LOCKED streamline before their feet plant on the wall.

If a swimmer can successfully do this twice, they should use the momentum of the flip to help throw their arms overhead—straight, so they’re in a streamline and ready to push off when the feet plant on the wall.

If a swimmer cannot successfully get their arms into a streamline before their feet plant on the wall, they should focus on minimizing the drag factors of their arms by bending their elbows and bringing the tops of the hands toward their goggles FIRST—then extending the arms overhead into a streamline.

The reason for the swimmer with the slower streamline speed to bend at their elbows is because a swimmer’s speed effectively goes to ZERO, when a swimmer plants their feet on the wall. Look at the picture above for reference. If a swimmer can get their hands up over their head before they speed hits zero, they can utilize the speed they carried through the turn for their arm speed. BUT, if a swimmer cannot get their arms overhead before their feet plant on the wall— their speed is effectively at ZERO, and they are creating even more drag by pushing their arms overhead themselves.

Remember: Water’s density is almost 800x more than air. With this means, the difference in drag between an in-water situation and in-air is very different. On land, we wouldn’t have to worry too much about what the arms were doing if we completed a flipturn on the deck—but with a swimmer swimming in water, the smallest changes make the biggest difference!

[CLICK HERE] for Part III, as we finish up our series on Freestyle Flipturns ending with the breakout!