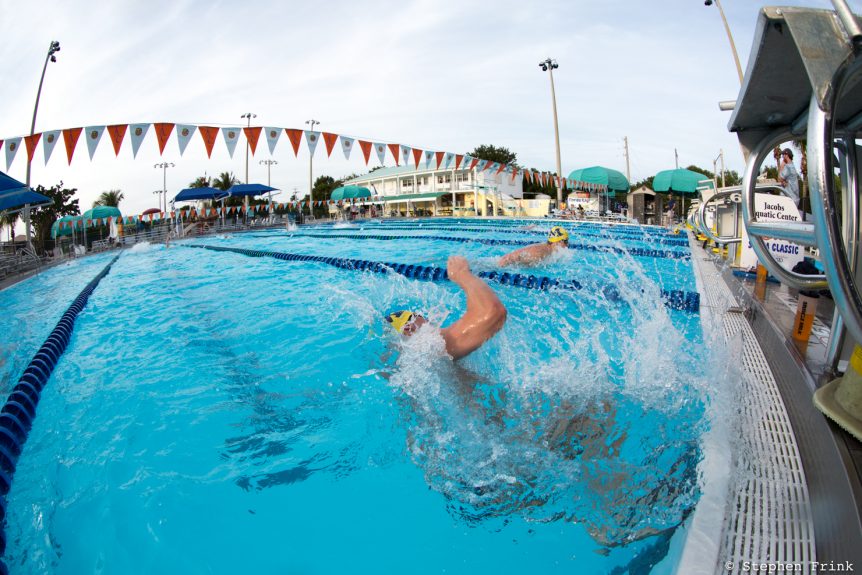 Welcome to our third segment on Open Turns. This week, we will be discussing the SECRET to a PERFECT Push and Glide off your walls– after completing either The Crunch or The Spin turn. If you’re not sure which turn you should be utilizing, [CLICK HERE] to learn more about the pros and cons of each of these Open Turn styles! Otherwise, let’s get started.

As we talked about last week, a swimmer will complete an Open Turn and end up in their normal “ready position”.

What is Normal “Ready” Position?

Normal “ready” position is defined as: swimmers feet and knees are shoulder width apart, one hand should on the wall, and the other arm off the wall—pointing to where the swimmer wants to go. See the picture below: 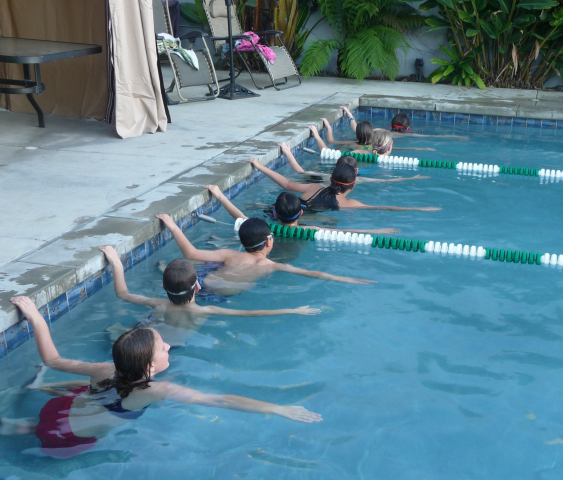 Once this perfect “ready” position has been achieved, swimmers perform a traditional push-off by extending the legs and letting go of the wall with other arm, by bending its’ elbow behind the swimmers head (creating a shark fin). Then eventually, extending that same arm straight to reach for the other arm—locking into a streamline—as the swimmer finishes fully extending their legs.

Let’s Break that Down Further…

To execute an awesome push and glide, swimmers must understand how DEEP they should go. In order to give you a solid answer on that, we need to explain a little bit about Force Plates.

Force Plates are measuring instruments that measure the ground reaction forces generated by a body standing on or moving across them, to quantify balance, gait, and other parameters of biomechanics. Force Places can be used in a pool setting to measure how much force swimmers can produce off their walls and starts.

Back in 1999, Lyttle AD, Blanksby BA, Elliott BC, Lloyd DG published an article titled, “Investigating Kinetics in the Freestyle Flip-turn Push-Off.” In this article, they measured the forced produced from swimmers on a push-off. What they found was the force produced by Elite swimmers ranged between 1.1-1.5X their body weight. Some swimmers even got closer to 2X their body weight.

For one of their swimmers in the study, they measured their push-off velocity (at a depth of 0.75m) comparatively to these 3 average force production values and got: 1.50 m/s, 2.18 m/s and 3.02m/s, respectively.

Side Note: what’s really important to keep track of here—is the swimmer’s starting speed (so how MUCH speed can they generate) and also, how much DRAG is associate with that speed. Because in reality, no matter what DEPTH you push-off of in the pool, a swimmer will ALWAYS slow down. This is because the drag coefficient is almost 800x more than air!

So here’s the swimmer’s data charted out:

When they took this data and compared the velocity to push-offs at different depths, they found a swimmer would save some TIME if they pushed off between the depths of 1.25-1.50m.

While all those numbers may seem insignificant, if swimmers is turning 3-7X in either a 200 or 400 Freestyle, they could shave anywhere from 0.238-0.021 seconds. I think we all know a few swimmers who have lost races by a hundredth or a tenth of a second.

Wrapping this up, it is ideal for swimmers to push-off between 1.25-1.5m with a force production of 1.1X their body weight. Obviously, keep in mind these values may change depending on your swimmers and their anthropometric measurements.

Be sure to stay tuned for next week’s post on the 7 Steps to a ELITE Streamline Glide.