Recently, at the 2018 SEC Championships, Caeleb Dressel swam the 100-yard Breaststroke in NCAA Record time of 50.03 seconds. During his race, Caeleb spent over 50% underwater (55% to be exact), and it couldn’t be better timing for us, since we are finishing up our blog series on the IMPORTANCE of dolphin kicking placement during Breaststroke Pullouts!

In case you’ve missed any of our prior parts of this series, [click here] to access them!

If you are caught up and ready to go, let’s get started!

Since Caeleb spent the majority of his race underwater, I figured it would make sense to give you the metrics on how he made the 50.03 swim possible.

Here’s what I calculated:

**Keep in mind all the metrics above have been converted to METERS!**

Also, if you’d like to see ALL of Caeleb’s metrics and his entire Race Analysis by Coach Abbie, [CLICK HERE] to watch his race analysis video! 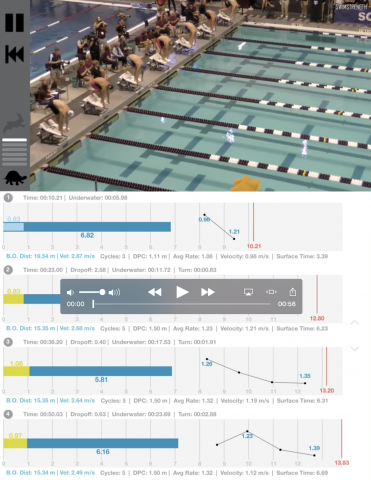 So if it isn’t obvious from his metrics (above) already, you can see from Caeleb’s Underwater Velocity is MORE than double his swim velocity. I previously wrote a blog series on the importance of underwater work for swimmers, in case you missed that [click here]. Caeleb’s swim, just adds more fuel to the fire that MOST swimmers are faster under the water than above.

So to take Caeleb’s metrics one step further, I decided to figure out EXACTLY how fast he is during each phase of his pullouts. For this, I did two calculations:

Here’s what I calculated:

What was really interesting about these metrics is what happens with Caeleb’s speed within his placement of his dolphin kick.

As you can see from the tables above, Caeleb’s speed is always highest coming from a concrete surface, BUT he maintains an even higher speed, prior to the arm pull-down–by initiating his dolphin kick BEFORE that happens!

If Caeleb were to perform his dolphin kick after the arm pull-down, he would be starting with a lower velocity (~1.7 m/s) and to bump his speed back up to ~1.9 m/s and SUSTAIN that–wouldn’t work! That is why it is very IMPORTANT that your Breaststrokers perform the dolphin kick PRIOR to arm-pull down, as the swimmer’s speed is slowing from a larger velocity—which in turn, helps the swimmer sustain a higher speed (for a longer period of time) when adding in the dolphin kick.

My friends, it’s not the power of the dolphin kick itself—but it’s the power of sustaining a high speed for as long as possible.

After all, that’s what we all do in swimming–right?